On the third morning of the retreat I had a ‘vision’. This would be similar to what is referred to in the west as a vivid dreaming state. You are in a dream-like state but you are awake. You are aware that what you are experiencing is an extraordinary state.

While lying on my bed, after walking practice a light red cylindrical ‘cloud’ appeared far overhead, seeming initially to really to be as ‘far away as heaven’. Shortly a thread started to descend from the near end of this ‘cloudlike celestial object’, which I noticed was already much closer. The thread dropped lower and lower, and came over very close. Closer and closer, very quickly, and it brushed against my bare arm.

I was surprised; more, almost shaken but still found myself reaching out to touch this tempting ‘thread from heaven’. It was almost alive, pinpoint accurate in it’s mission. There was a sense of reality to it that seemed to transcend the dream state. Above it connected to some realm, objective to this one, higher, somehow containing the one I was in. (like that of the fisherman compared with that of the fish!)

Once I touched it, In a flash the cloud and thread were gone, replaced by a Chinese immortal, complete with topknot and long beard, steering a boat around in the space immediately in front of me. He quickly passed very close a few times, looking at me carefully, his dog beside him, in the stern of the boat right where I would sit (if say, I just happened to be in a boat with an immortal, just say…, myself being a Dog in Chinese astrology and all that). The dog stared right at me the entire time. Even as the Immortal Helsman made quick turns as he guided the craft around at eye level, the dog never lost sight of me. The boat was not big, just a dingy really. He steered deftly, obviously no amateur in a boat ( I really hate that, being literally raised in a boat and extremely handy on the tiller. Many can attest to this I assure you).

When I awoke, I immediately knew this was not an ordinary dream. The sense of the cloud and it’s thread were still with me. I could easily bring the vivifyingness of the chi of the thread right into my practice, and blend it with the qi I was working with, the jing chi in particular but also the chi of pore breathing, bone chi, the chi of nostril breathing and the qi that manifests as the ‘Brightness in the Empty Room’. To accomplish this it is only necessary to activate ‘the part of the shen that was awake in the dream’ and the chi from the thread activates in the practice. This aspect of the experience Master Wang later described as ‘special tricks learned in sitting practice’. I was encouraged by this as I was far from certain interacting with this chi was be considered favorible practice. ‘Do not let the thread break’ was his strongest piece of advice. I have been working with this since the experience.

I got to the dining hall and sat with Ian Johnson, fellow Canadian and Bejing resident. Ian was in a rush to get to the Chongyang ceremony at the Immortal Wang temple. He explained it was the Double Nine day, The 9th day of the 9th Chinese lunar month is the day of maximum yang, 9 being the numeric of maximum yang in the I Ching. It’s the optimium day to ascend (if you happen to already be a realized practitioner that has satisfied all the prerequisites !). On Ian’s advice quickly I gathered my things and headed to the temple with my friends.

The door was already closed when we arrived, but a few words from Kathy and we were let in. Right inside the door was Master Wang. He quickly grabbed me under one arm (Kathy stood there grinning silently) and guided me right into the middle of the ceremonial space and deposited me in from of a large sloping cushion (like I knew what I was supposed to do!). For reasons only Master Wang knows, he had me standing in his place. (what did I know). “Just do whatever the guy in the fancy robe does” Kathy whispered in my ear. 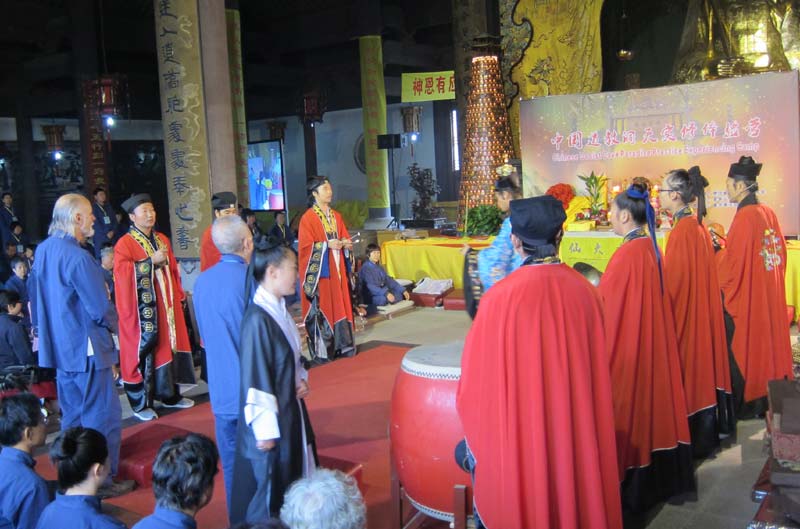 Up and down, bowing to “Immortal Wang”, kneeling on that hard cushion, cymbals clashing, bells ringing, drums, the organ, an and on for 1 hour and 40 minutes, ending spectacularily as I held a burning yellow paper box like it was some scared object. The priestess made sure it did not topple (my hands were shaking a bit after several long minutes), deftly balancing it with two long sticks of incense. At one point it seemed to reach critical mass and explode, showering paper ashes all over the floor as the heated air inside blew off the flaming stack of burning paper she had placed on the top. Quite a show. 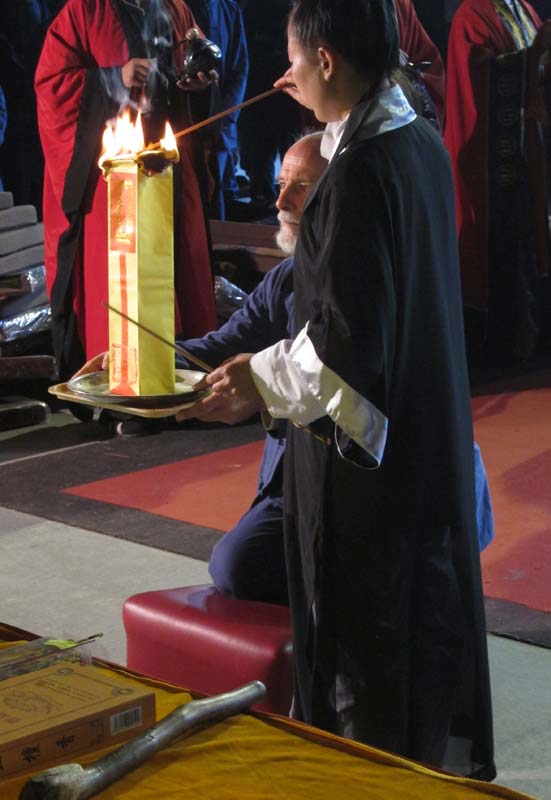 The Priestess places the offering on the box and ignites it!

Back in my hotel room, I immediately sketched the two part vision, the Cloud and Thread and the Immortal with Dog in the Boat. I added a few short descriptive lines which Kathy then translated in Chinese for Master Wang’s interpretation. He immediately asked for ‘more details’. I added what I could and returned the sketch.

It was a week later at the International Students private session with Master Wang that I heard his interpretation. I’m very glad I taped that session and BK’s daughter’s translation. 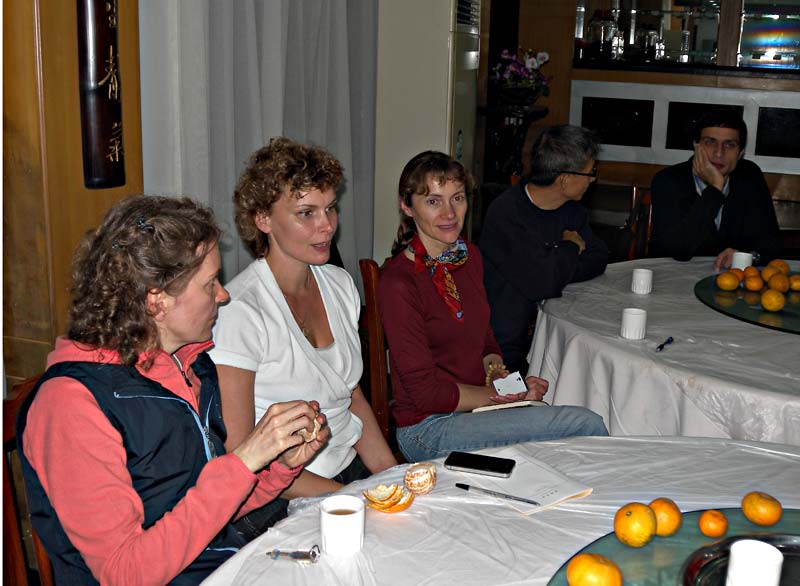 Our excellent translators, BK Wee and his daughter of Singapore

The vision indicated ‘smooth sailing’ since the boat was moving easily and not say ‘stuck in the mud’. I was thankful for that. He said this was a sign of progress in  practice,  some contact with another realm and in contacting (touching) it, I was able to see something in this realm. His advice. ‘Hold your breath’ to make the vision last longer, and get as many details as possible. Color, shape, movement, inscriptions, every detail possible. The more detail provided, the more interpretation is possible. He also said 6 or 7 other students reported having similar visions at that same time.

Later on the Double 9 day, Master Wang lectured on choosing the optimum location for ascension. Your birthplace is often the best, many immortal return to their home town to ascend. Also high mountains are good, since they are ‘closer to heaven’.