Master Wang Li Ping’s International Winter Solstice retreat, hosted by his translator Richard Liao was held in Dalian China in 2017. The venue that year was the old Hot Spring Hotel in Anbo Town, 2 hours north-east of Dalian in the arid frozen countryside. They try to ski on the barren hills, snow-making guns going non-stop for the ‘holiday’ season. The retreat is over Christmas, Dec 20 – 29, but you do not see much Christmas in China, a few Santa Claus in very Chinese red suits. Panda like. It sort of works.

The retreat was held in a carefully blacked-out room. It’s Winter Solstice. It’s cold. There is (luke warm) hot water for about 2 hours in the morning. Morning walking practice starts in the dark. It’s minus 20 or so most mornings. So in that deep yin, the yang should stand out. It is a hot spring area. The hotel is occassionally a destination for a busload of visitors on the weekend. The yang is really there, piped in from underground.

I had not seen Master Wang since 2012. 5 years and two months since the Jin Hua Retreat. Events that transpired from that retreat had in those five years, transformed my life and my sense of who I was (am). I met Randi, many thanks to the lineage. A process was initiated that culminated for me in December 2016. That year, Richard’s retreat was held in Hilo, Hawaii. That meant the evening Shui Gong (sleeping practice) sessions, that normally start at 10:00 pm started conveniently at 3:00 pm in the afternoon in Thailand where I spend my winters.

I find that it’s often possible to join the Master for shui gong from anywhere. Several evening during the 10 days I had profound experiences, that linked together many experiences I had been having in the previous months/years, and culminated with a singular ‘Joining of Sun and Moon’. I have been a student of Taoist Scripture (in translation) for as long as I have been  Taoist (50 years). One passage among many stood out “Ingest one drop if this and you know your destiny does not depend on heaven”.If you know where to look, it is all written down, so talking about it reveals nothing new.

In the weeks following the I talked to Richard about having the next retreat at Tao Garden where I live in the winter. The plans actually got quite advanced (and expensive), and it was eventually decided to hold the event in Dalian in 2017. I also committed to going to that retreat. I realized I had arrived at the point where I felt I had a grasp of the practice that previously escaped me. I felt ready. I let Richard know I would ask Master Wang for permission to teach.

The retreat started and ended up as somewhat of a trial. A few days before, I contacted an eye infection I failed to treat before leaving. The entire ten days it got worse and worse until my left eye was red, weeping and horribly itchy. Richard got some ointment once we were back in Dalian. Even that was not much help. Only antibiotic drops cured it back in Thailand. Master Wang kept putting off any meeting. The 15 Chinese students definitely kept him busy. Richard kept trying, almost despairing at one point. Only on the second last evening did I get to meet the Master.

With Chinese students running in and out, Richard and I carried out this (to me) delicate task. I wanted to talk about my experiences with Randi and the roots of dual cultivation in the Northern Branch. With Master Wang I simply assume he knows everything so you can just get right to the point. I asked if our having received the practice meant it was something for us share, to teach? He looked at me ‘sort of strangely’. “It’s only for between a male and a female. A man cannot teach a man etc. So how would we teach? He clearly did not think it appropriate for me to teach a woman. How much can you even share.

I described how we had experimented with many “arrangements”, facing one another, side by side, etc, many (most) not actual, or barely touching. He had a few pointers! Obviously he was familiar with the experiences I was describing that are not in any written form except by very abstract allusion. Hint, the image on the back of Ling Bao Tong Zhi Neng Nei Gong Shu is describing it. This image is of Ancestor Lu. He learned the dual cultivation practice in Sichan from a female master according to some legends. 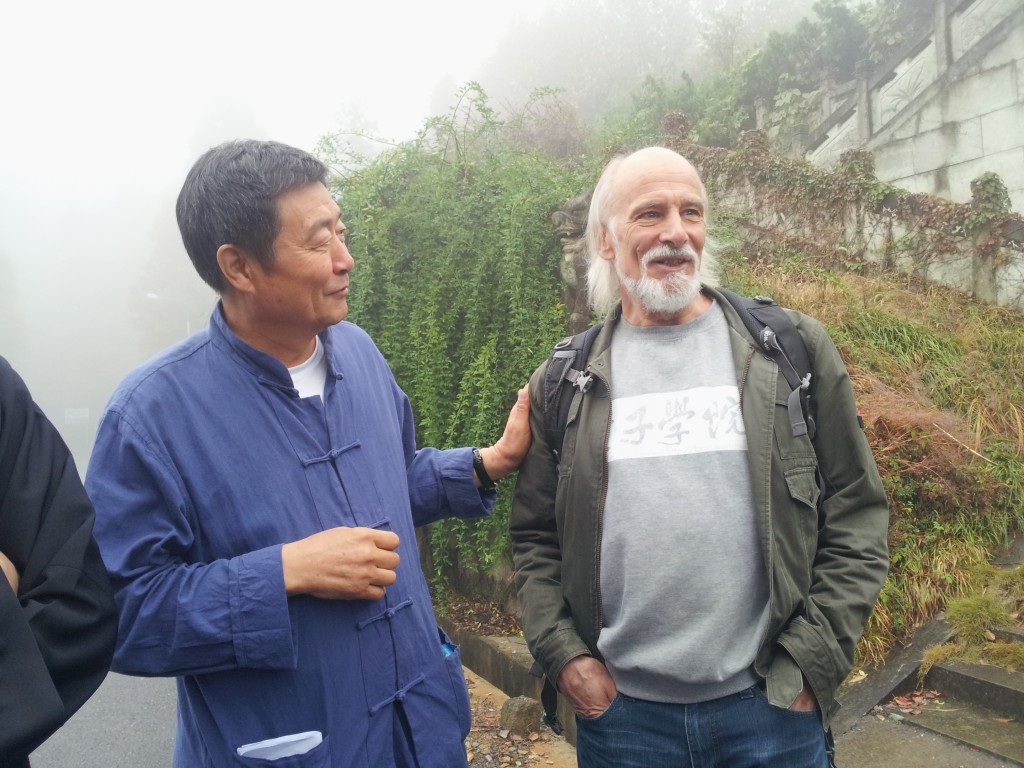